From the sermon given at the Spring Equinox Worship Service, March 23, 2003.

In this, the first of our year’s services devoted to creativity, we will be focusing on the idea of God the Creator.

I thought I would start out by talking a little about what I mean when I use the word creativity.  Usually when people use the word creativity, they apply it to people who are involved with certain occupations or activities, such as musicians or architects, writers or actors.  Creativity conjures up images of gifted individuals, people we think of as “artists,” who create an object of some sort:  a painting, a sculpture, a song or musical piece that can be reduced to a sheet of music.

Too often we think that for someone to be considered creative, they should be an individual with extraordinary talent who contributes something tangible to the world, something that appeals to our senses, something that can be heard, felt, tasted or seen.  Sometimes, we are a bit more charitable and we label as creative an individual who is more of an ordinary person but one who puts their heart and soul into creating an object of admiration.  We might consider the housewife who consistently serves her family gourmet meals, or the hobbyist who produces birdhouses out of old barn wood in his garage as creative people.  But in any case, creativity gets associated with things of the physical.  In our physical world, creativity is a trait that is primarily validated if it results in physical matter.

Creative Energy is a powerful force, whether raw or engineered.

In reality, creativity is a spiritual trait that may or may not manifest into physical matter.  Creative energy is the basic building block of the universe.  Scientists tell us that all matter is comprised of small bits or waves that form atoms, particles that we cannot see smell, taste, feel, hear, or see, at least with our naked eyes.  We accept the belief that atoms exist, nonetheless.  So too, all of spiritual reality results from creative energy in some form or fashion.  All of life reflects the infinite possibilities that exist as a result of the variations of vibrations originating from creative energy.  God, the Creator of everything and everyone in our universe, created us in unimaginable variety, and created us in its image.  That is to say that we reflect our origin, and our origin is creative beyond our wildest imagination.  Creativity is our birthright, it is our heritage, it is our natural state of being.  Creativity is not extraordinary.  It is very much ordinary.

When we look around us at the world, at first it does not seem to be a world full of creativity.  It is a harsh world out there, one full of pain and ugliness, fear, and despair, hatred, and other debilitating energies.  It’s easy to understand why we would want to focus only on noticing our creativity when it results in great works of art or music.  Those are usually the bright spots in the otherwise dark reality of the world we have created.  We like to notice our creativity when it results in things we like.  We don’t like to notice it when it results in things we don’t like.

But we have created it all, the bad and the good, the ugly as well as the beautiful, the pain as well as the joy, the war as well as the peace.  God so loved and continues to loves us that our Creator also gave us one of the greatest gifts of all:  free will, or dominion, as it is known in the passage I will read you from Genesis later in this service.  We get to create anything we want, including hell on Earth, if that suits our needs.

We are all spirit and we all have an infinite ability to create our lives.  The single Mom in Topeka, Kansas who struggles to raise five kids on welfare may not feel very creative, but each and every day that she gets through requires tremendous creative energy on her part.  The homeless guy in downtown Olympia whose day is spent in pursuit of a warm place to be in between meals at Bread and Roses and a cot at the Salvation Army is exercising his creativity in the service of his survival.  He may not be producing a work of art that will be present after he leaves this physical plane, but his creativity is no less valid than that of Pablo Picasso; and is certainly more relevant to his own needs.  Each and every individual soul gets to decide what type of life experience he or she wants, and is given enough creative energy in pursuit of that experience.

As I was thinking about what I wanted to create through this sermon, I found my thoughts often wandering to examination of the issue of the one-to-one correspondence of life.  The Bible tells us that we are created in God’s image.  But as a species, we have a tendency to turn that around, and try to force the physical to dominate the spiritual.  In our arrogance, we’d rather think about it as God being created in our image.  And so, the history of religion is the history of people trying to remake God as a reflection of our view of humanity, whatever that view is in that country or culture.

Archeologists tell us that religion and art began during the same time period, in other words, around the time that our physical bodies transitioned from a four-legged species to a two-legged naked ape.  As soon as we became distinctly human, we created.  We created images of the world around us in our cave paintings.  And we created religions, religions that were primarily devoted to nature.  The first images of the divine were an attempt to acknowledge God in the physical world around us.  God was not some gray-haired white dude with a beard sitting in the clouds.  At least not for several thousands of years.  Initially, God was the sun and the moon and the stars, and the wind, and the rain, lakes and rivers and the harvest, and the animals.  And the divine came not only in many forms but did so simultaneously.  There were Gods everywhere, not just a God.  As a group, we were learning to live through physical matter, and validated the creative source around and in us, by acknowledging life everywhere.

As groups of humans began to transition into human civilizations, our images of the divine also began to transition.  The Gods of early cultures were amazingly human.  They were imbibed with human emotion, often consumed with lust, greed, petty rivalries and sexual jealousy.  The Old Testament, the foundation for the Judeo-Christian tradition with which most of us were raised, essentially spoke of several Gods, albeit by talking about several “aspects” of one God.  The God of the Old Testament physically walked and talked with us mere mortals, was demanding, competitive, jealous and seemingly arbitrary, and functioned primarily as a tribal deity.  In this latter capacity, this very human image of God was designed to protect favored groups of people and punish others with a great deal of vindictive violence.  It is no coincidence that we created this God in our image during a time in our history in which there were increasing numbers of humans on Earth, and increasing opportunities for intercultural strife.

As human society further evolved, so did our concepts about the divine.  In the Western part of the world, we made the leap to an image of one God who, at least theoretically, created all of the universe.  The three great monotheistic religions–Judaism, Christianity, and Islam–eventually came down strongly on the side of the argument that there is only one God.  Unfortunately, the followers of each religious tradition were not able to imagine this deity as embracing all.  To this day, adherents of these faiths still have largely not let go of the “tribal thinking” part of their earlier belief systems.  The God for each of these religions tends to be held out as one which favors and protects that part of the universe which is inhabited by that particular set of followers, to the detriment of other humans.

I think that the current conflict between Iraq and the United States is due, in large part, to the need of both countries to battle for supremacy of their mutually-exclusive tribal-based belief systems.  It is my sincere hope that out of this war will come the understanding that God favors no one.  God simply is.  Or said another way, God favors everyone.  Hopefully increasing number of people will understand that our salvation comes when we allow God to create through our lives, as opposed to attempting to force a human agenda upon God through our images of the Creator-of-Us-All.  We need to grow up further.  We need to learn to approach the divine from a more realistic, humbled spiritual perspective, rather than a distinctly human ego-based one. 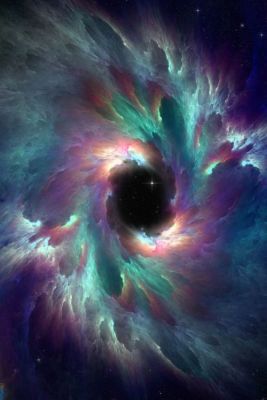 The magical strength, beauty and mystery of a Black Hole as seen by powerful telescope.